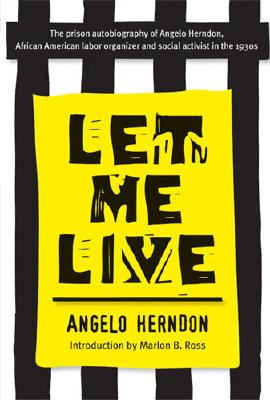 Let Me Live
by Angelo Herndon

Book Description:
Let Me Live tells the remarkable story of Angelo Herndon, a coal miner who worked as a labor organizer in Alabama and Georgia in the 1930s. Herndon led a racially integrated march of the unemployed in 1932 and was subsequently arrested when Communist Party literature was found in his bedroom. His trial made only small headlines at first, but eventually an international campaign to free him emerged, thanks to the efforts of the Communist Party and of labor unions interested in protecting the right to organize in the South. Herndon was finally set free by the U.S. Supreme Court, with the help of well-known leaders including C. Vann Woodward, Thurgood Marshall, A. Philip Randolph, and Whitney North Seymour, Sr.Written while Herndon was in prison, Let Me Live tells the story behind his arrest and his struggle through the courts. It also describes his early life as a young boy in poverty, as a laborer in the Kentucky mines, and as a construction gang worker and traces the birth and development of his passion for the Communist Party. Originally published in 1937, this is the first new edition of Let Me Live since 1969, when Howard N. Meyer rescued it from obscurity. The book features texts from the Georgia and U.S. Supreme Court decisions, the text of Herndon’s speech, and newspaper editorials from the era. A substantive and thought-provoking introduction by Marlon B. Ross of the University of Virginia sheds light on this unique story and its importance to our understanding of the intersection of race and class in America?past and present. “A book which every thoughtful American may do well to read. It is moving and challenging as the story of one man’s life and the question of one man’s fate.” ?New York Times

Tell us what do you think about Let Me Live.