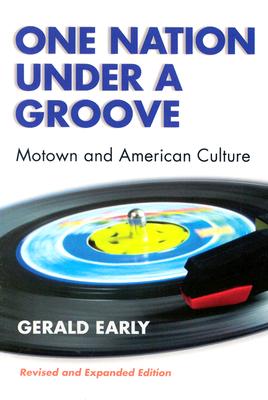 One Nation Under A Groove: Motown and American Culture
by Gerald L. Early

Book Description:
In its heyday Motown Records was a household word, one of the most famous and successful black-owned businesses in American history, and, arguably, the most significant of all American independent record labels.

How it got to be that way and how it changed the face of American popular culture are the subjects of this concise study of Berry Gordy’s phenomenal creation. Author Gerald Early tells the story of the cultural and historical conditions that made Motown Records possible, including the dramatic shifts in American popular music of the time, changes in race relations and racial attitudes, and the rise of a black urban population. Early concentrates in particular on the 1960s and 70s, when Motown had its biggest impact on American musical tastes and styles.
With this revised and expanded edition, the author provides an up-to-date bibliography of the major books that have been written about Motown Records specifically, and black American music generally. Plus, new appendices feature interviews with four of the major creators of the Motown Sound: Berry Gordy, Stevie Wonder, Diana Ross, and Marvin Gaye.

More books like One Nation Under A Groove: Motown and American Culture may be found by selecting the categories below: