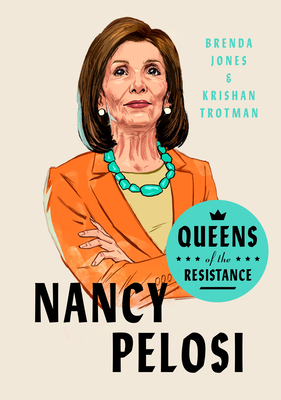 Queens of the Resistance: Nancy Pelosi
by Brenda Jones and Krishan Trotman

Hardcover Description:Part of the four-book Queens of the Resistance series, saluting some of the most beloved boss ladies in Congress: a celebration of the first woman Speaker of the House and a trailblazer for generations to come, Nancy Pelosi

Behold one of the toughest dealers in the political arena, a singularly shrewd operator who cut her teeth from deep within the ranks of the Democratic Party and climbed all the way to the top. Rising higher than any woman ever who came before, Madame Speaker created a blueprint that those after her could follow. And now, back to her rightful place as Madame Speaker, she’s prepared to take back power for the people … and at the end of it all, in characteristic class and style, she will pass on the gavel to the next generation of badass leaders. With illustrations, deep research, and writing as endlessly quotable as she is, Queens of the Resistance pays tribute to this phenomenal woman. About the series: Each book of the Queens of the Resistance series is a celebration of the rebellion against the oppression of women and an embracement of the new in the United States government. The series is adorned with sass, discernment, and the badassery of the present and future leadership. The Doomsday Clock is at a minute to midnight, and the patriarchal power grid that lights "the shining city on a Hill" is about to black out. It’s time to yield to the alternative—the power of women.

More books like Queens of the Resistance: Nancy Pelosi may be found by selecting the categories below: