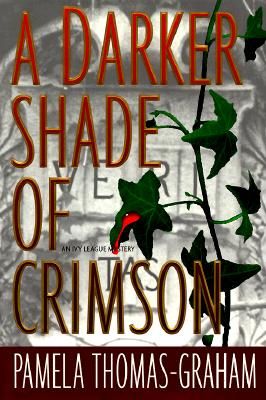 Hardcover Description:
Being young, gifted, and black at Harvard has always been difficult. For Rosezella Maynette Fisher, outspoken sister girl and controversial Dean of Students at Harvard Law School, it was murder. And the debonair new President of Harvard is a prime suspect. A Darker Shade of Crimson is a novel about how Ella Fisher ended up dead on the first day of the fall semester, and how her friend Veronica (Nikki) Chase — a smart, ambitious, attractive, and well-connected black economics professor — sets out to solve the crime, and in the process uncovers some of Harvard’s most deeply buried secrets. At twenty-eight, Nikki is a rising star, the only black professor in Harvard’s economics department. After stumbling over Ella Fisher’s body during a blackout in a classroom building, she is quickly plunged into the investigation of her death. With the occasional tip from Raphael Griffin, a Harvard policeman, Nikki learns that plenty of people could have wanted Ella dead. There is the new Harvard President Leo Barrett, whose rise to the top Ella helped engineer. Before her death, many thought Ella was Leo’s lover. Now he’s looking perpetually exhausted and guilty. Did they have a fatal falling out? Or did Leo’s high-society Brahmin wife, Victoria Wolcott Barrett, kill Ella to stop the affair? Perhaps the sleek university comptroller, Christian Chung — whom Nikki comes to suspect is the leader of an embezzlement scheme that Ella uncovered just before she died — did the deed. Or it could have been the Chairman of the Economics Department and Nikki’s mentor, Ian McAllister, who suddenly seems to have unlimited cash. Finally, there’s Ella’s radical Afrocentric ex-husband Isaiah Fisher, who Nikki discovers was holding a long-buried secret over Ella’s head. Only two people seem to mourn Ella’s passing: her blue-blooded, Wellesley-educated secretary, Lindsey Wentworth; and Ella’s best girlfriend, Alix Coulter, an actress from Texas with attitude. With their help, Nikki sets out to unravel simultaneously the mystery of Ella’s death and the complications of her own love life. Dante Rosario, her long-lost exboyfriend, turns up and sets off a chemical reaction; meanwhile, Justin Simms, a Harvard Law School student who flirts like a master, won’t take no for an answer. It takes the combined wisdom of Nikki’s landlady, Magnolia Dailey, and her best friend, Jessica Leiberman, to help her understand her own heart as she drives toward the shocking conclusion that will turn all of Harvard on its ear. Proving that love can be murder, A Darker Shade of Crimson launches a major new career in crime fiction.

Books similiar to A Darker Shade of Crimson (Ivy League Mysteries) may be found in the categories below: