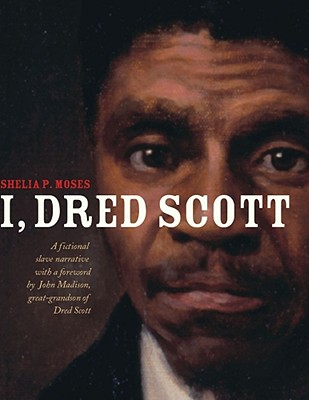 I, Dred Scott: A Fictional Slave Narrative Based on the Life and Legal Precedent of Dred Scott
by Shelia P. Moses

Hardcover Description:
Born into slavery in Virginia in the late 1700s, Dred Scott had little to look forward to in life. But he was fortunate in two ways: His first owner was fairly kind to him, and he grew up with his owner’s children, forming friendships that he would come to depend on years later. For on April 6, 1846, Dred Scott and his wife, Harriett their ownership having changed hands several times during adulthood took the dangerous and courageous step to sue for their freedom, entering into legal battles that would last for eleven years. During this time Dred Scott would need all the help and support he could get from folks in the community all the way back to the people with whom he had been raised.
With a foreword by Dred Scott’s great-grandson, Shelia P. Moses’ stunning story chronicles Dred Scott’s experiences as a slave, as a plaintiff in one of the most important legal cases in American history, and at last as a free man. Dred Scott’s story is one of tremendous courage and fierce determination. His is a life that should be known by and should inspire all Americans.

More books like I, Dred Scott: A Fictional Slave Narrative Based on the Life and Legal Precedent of Dred Scott may be found by selecting the categories below: