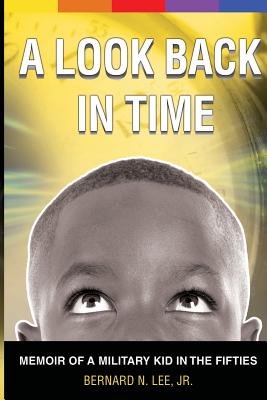 A Look Back In Time
by Bernard N. Lee, Jr.

Paperback Description:
"A Look Back In Time: Memoir of a Military Kid in the Fifties" is a fascinating, insightful, inspiring, and sometimes hilarious chronicle of life while growing up in a military family - Colonel Arnold R. Goodson, United States Army (Retired).
When I was a child, we were always moving from one place to another. Making friends was something I looked forward to with an uneasy anticipation.
My dad was in the military. We moved, like clockwork, every three years until I was more than twenty-years-old. The things I saw and the places I lived are now a part of history. They form the canvass for "A Look Back In Time: Memoir of a Military Kid in the Fifties."
There’s Humor: On the farm, the rooster crows before the sun rises and wakes long before a dreaming boy wants to open his eyes. That is another reason why I hated roosters. They don’t work like your alarm clock. You can’t punch them and then go back to sleep.
There’s Intrigue: Dad sat in the chair next to the doorway. I plopped down into one right next to him. Although we were sitting just a few inches apart, I felt like I was marooned on Mars. My dad was silent and removed. Once again, I felt abandoned.
There’s Suspense: As I entered the cobblestone roadway, there was a bright light shining in my eyes. Then, I heard the horn blow and wheels screech. I looked right into the jaws of death. I was headed straight for a military personnel carrier three sizes bigger than a Ford F150. I hit the brakes, braced myself, and waited for the truck to wipe me out!
There’s Romance: I could still smell the aroma of her perfume long after I could no longer see the greyhound on the back of the bus.
There’s Something for Young and Old: I invite you to go along so that you can experience what it was like for a young man of color to grow up in the U.S.A. during the fifties. I am excited about the chance to share these memories with you. I hope you will find significant reflections of your own childhood among them.

More books like A Look Back In Time may be found by selecting the categories below: