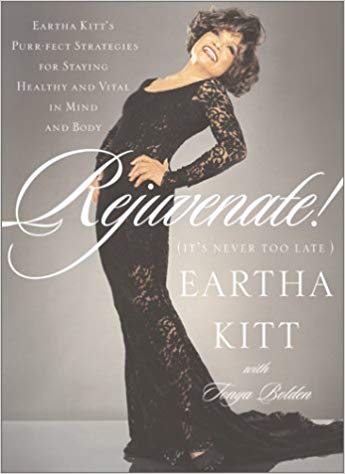 The purr-fect guide to staying mentally and physically healthy and vital from the legendary star who defines longevity.

From her hit songs in the 1950s and television stardom as Catwoman on Batman in the 1960s to her sold-out shows at New York’s Café Carlyle in the 1990s, her Tony-nominated role on Broadway in 1999, and her hilarious performance as Yzma, the villainess in Disney’s The Emperor’s New Groove in 2000, Eartha Kitt is one of America’s most versatile and enduring performers. Now, at seventy-four and still going strong, Kitt reveals her secrets of vitality in Rejuvenate!, an elegant and inspiring book.

Seductive, provocative, amusing, and calming, she combines the lessons of her life — from a difficult childhood in the South and in Harlem to the joys and challenges of her life in the public eye — to offer this wise window into her incredible mental and physical vigor and an open invitation to the joys of aging in style.

Rejuvenate! is a simple, user-friendly guide that doesn’t require a gym, a personal trainer, or even exercise equipment. Each of the nine chapters, with titles such as “Bend,” “Stretch,” and “Rock-and-Roll,” features one basic exercise for the body with easy-to-follow instructions and an entertaining, inspiring message for the mind.