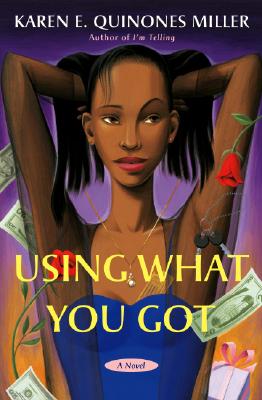 Using What You Got: A Novel
by Karen E. Quinones Miller

Book Description:
In Using What You Got, Karen E. Quinones Miller returns to her beloved Harlem to spin a dynamic tale that sparkles with the blush of first love and the hard-won lessons that endure. Eighteen-year-old college student Tiara Bynum is as pretty as a princess and just as spoiled. Her castle is the Harlem housing project where she lives with her younger sister, Jo-Jo, and her doting father, Reggie. Her fiefdom is the legion of men at her beck and call every time she snaps her perfectly manicured fingers. She has no qualms about flaunting her charms to get what she wants because she’s "got it like that." Reggie — a former professional gambler who was abandoned by his wife — would do anything for his daughters, even if it means jeopardizing the family finances in favor of his girls’ material happiness. Though Reggie’s sister, Charlene — a woman embittered by a disfiguring car accident — pleads for restraint, her Thursday "family nights" pale in comparison to Reggie’s Knicks tickets and shopping sprees. Blissfully unaware of the recklessness of her father’s splurges, Tiara believes she’s the toast of the world. Her greatest goal is to find a rich, handsome man who will spoil her just as much as he does — or maybe even more. Go for the glitter, she urges herself. Who cares if it’s gold? When two suitors arrive on the scene, Tiara prepares to be smitten. But when the one she secretly adores doesn’t like her attitude, Tiara’s trademark confidence frays into embarrassment, shame, and confusion. Blindly determined to strike out on her own at any cost, Tiara lashes out against those who love her most. Yet the choices she makes, based on the way she’s been raised, threaten to destroy not only Tiara, but her entire family.

More books like Using What You Got: A Novel may be found by selecting the categories below:

Tell us what do you think about Using What You Got: A Novel.