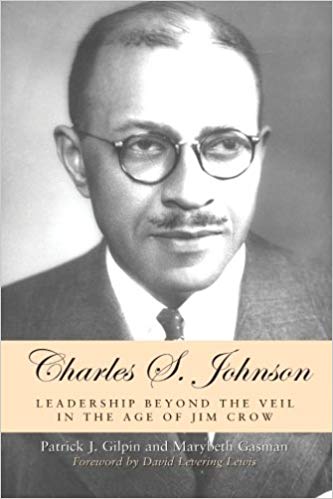 Charles S. Johnson: Leadership Beyond the Veil in the Age of Jim Crow
by Patrick J. Gilpin, Marybeth Gasman, and David Levering Lewis

Book Description:
The milestones for blacks in twentieth-century America--the Harlem Renaissance, the struggle for equal education, and the civil rights movement--would have been inconceivable without the contributions of one important but often overlooked figure, Charles S. Johnson (1893-1956). This compelling biography demonstrates the scope of his achievements, situates him among other black intellectuals of his time, and casts new light on a pivotal era in the struggle for black equality in America. An impresario of Harlem Renaissance culture, an eminent Chicago-trained sociologist, a pioneering race relations leader, and an educator of the generation that freed itself from legalized segregation, Johnson was a visionary who linked the everyday struggles of blacks with the larger intellectual and political currents of the day. His distinguished career included twenty-eight years at Fisk University, where he established the famed Race Relations Institute and became Fisk’s first black president.

More books like Charles S. Johnson: Leadership Beyond the Veil in the Age of Jim Crow may be found by selecting the categories below: