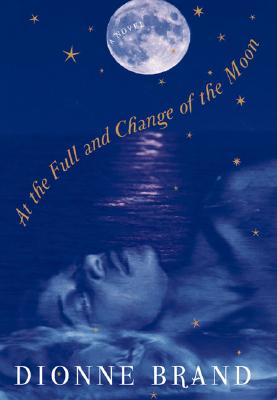 At the Full and Change of the Moon
by Dionne Brand

Paperback Description:
Written with lyrical fire in a chorus of vividly rendered voices, Dionne Brand’s second novel is an epic of the African diaspora across the globe. It begins in 1824 on Trinidad, where Marie-Ursule, queen of a secret slave society called the Sans Peur Regiment, plots a mass suicide. The end of the Sans Peur is also the beginning of a new world, for Marie-Ursule cannot kill her young daughter, Bola — who escapes to live free and bear a dynasty of descendants who spill out across the Caribbean, North America, and Europe. Haunted by a legacy of passion and oppression, the children of Bola pass through two world wars and into the confusion, estrangement, and violence of the late twentieth century. "[Brand has] a lush and exuberant style that may put some readers in mind of Toni Morrison or Edwidge Danticat." — William Ferguson, The New York Times Book Review; "A delicately structured, beautifully written novel infused with rare emotional clarity." — Julie Wheelwright, The Independent (London); "Rich, elegiac, almost biblical in its rhythms … One of the essential works of our times." — The Globe & Mail (Toronto)

More books like At the Full and Change of the Moon may be found by selecting the categories below: