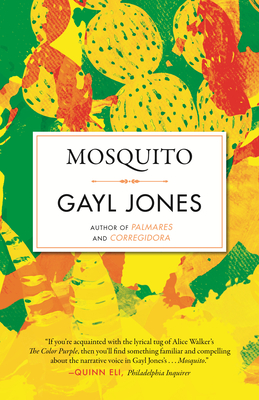 Bury those easy-to-read Black romance books. Mosquito is where African-American literature is heading as we approach the twenty-first century. —E. Ethelbert Miller, Emerge

From the highly acclaimed author of Palmares, Corregidora, and The Healing—a rare and unforgettable journey set along the US-Mexico border about identity, immigration, and “the new underground railroad.”

First discovered and edited by Toni Morrison, Gayl Jones has been described as one of the great literary writers of the 20th century. In Mosquito, she examines the US-Mexico border crisis through the eyes of Sojourner Nadine Jane Johnson, an African American truck driver known as Mosquito. Her journey begins after she discovers a stowaway who nearly gives birth in the back of her truck, sparking Mosquito’s accidental yet growing involvement in “the new underground railroad,” a sanctuary movement for Mexican immigrants.

As Mosquito’s understanding of the immigrants’ need to forge new lives and identities deepens, so too does Mosquito’s romance with Ray, a gentle revolutionary, a philosopher, and, perhaps, a priest. Along the road, Mosquito introduces us to Delgadina, a Chicana bartender who fries cactus, writes haunting stories, and studies to become a detective; Monkey Bread, a childhood pal who is, improbably, assistant to a blonde star in Hollywood; Maria, the stowaway who names her baby Journal, a misspelled tribute to her unwitting benefactor Sojourner; and many more.

”Gayl Jones is the black writer we all want to be when we grow up … Mosquito is Gayl Jones unbound, but certainly not untethered nor without her still prodigious storehouses of language, craft, and storytelling prowess.“—Greg Tate, Voice Literary Supplement