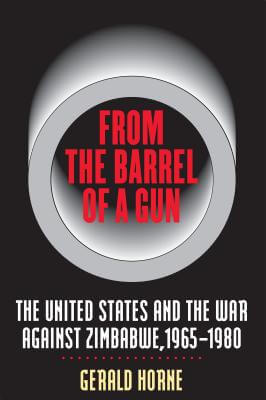 From the Barrel of a Gun: The United States and the War against Zimbabwe, 1965-1980
by Gerald Horne

Paperback Description:
In November 1965, Ian Smith’s white minority government in Southern Rhodesia (now Zimbabwe) made a unilateral declaration of independence, breaking with Great Britain. With a European population of a few hundred thousand dominating an African majority of several million, Rhodesia’s racial structure echoed the apartheid of neighboring South Africa. Smith’s declaration sparked an escalating guerrilla war that claimed thousands of lives. Across the Atlantic, President Lyndon B. Johnson nervously watched events in Rhodesia, fearing that racial conflict abroad could inflame racial discord at home. Although Washington officially voiced concerns over human rights violations, an attitude of tolerance generally marked U. S. relations with the Rhodesian government: sanctions were imposed but not strictly enforced, and hundreds, perhaps thousands, of American mercenaries joined white Rhodesia’s side in battle with little to fear from U. S. laws. Despite such tacit U. S. support, Smith’s regime fell in 1980, and the independent state of Zimbabwe was born. The first comprehensive account of American involvement in the war against Zimbabwe, this compelling work also explores how our relationship with Rhodesia helped define interracial dynamics in the United States, and vice versa.

More books like From the Barrel of a Gun: The United States and the War against Zimbabwe, 1965-1980 may be found by selecting the categories below: