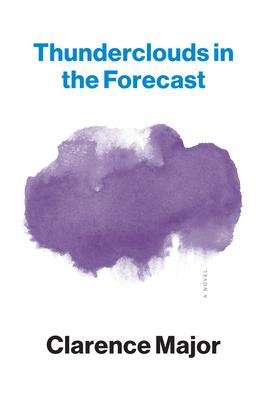 Thunderclouds in the Forecast
by Clarence Major

Thunderclouds in the Forecast traverses the linked histories of two friends—one Black, the other white—who grew up wards of the state in New York. It’s April 1976 and Ray is taking Amtrak to San Francisco to reconnect with Scotty, his oldest friend, whom he met in a shelter for abandoned children. While Ray has embraced the stable tedium of steady employment, Scotty’s life has been erratic, a trail of short-lived affairs and dead-end jobs. Maybe Ray, who’s just won the lottery, is finally in a position to help him.

When Ray’s train is delayed in Lorena, a Gold Rush outpost turned college town, he meets Alice. Together they embark on a romance that tempts him to stay. By the time Ray arrives in San Francisco, Scotty has abandoned his bartending job, his rented room, and his scant belongings and skipped town with a married woman from Lorena. Now Ray has more than one reason to return.

A preeminent American writer who thrives on reinvention, Major returns with an unforgettable exploration of life on the brink of sweeping change. With spare prose and subtle poignancy, Thunderclouds in the Forecast probes love, loyalty, and belonging. As Toni Morrison wrote, “Clarence Major has a remarkable mind and the talent to match.”

Books similiar to Thunderclouds in the Forecast may be found in the categories below: