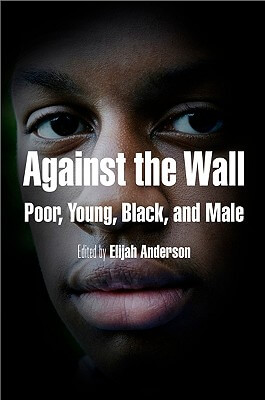 Against The Wall: Poor, Young, Black, And Male (The City In The Twenty-First Century)
by Elijah Anderson

Paperback Description:
Selected by Choice magazine as an Outstanding Academic TitleTypically residing in areas of concentrated urban poverty, too many young black men are trapped in a horrific cycle that includes active discrimination, unemployment, violence, crime, prison, and early death. This toxic mixture has given rise to wider stereotypes that limit the social capital of all young black males.Edited and with an introductory chapter by sociologist Elijah Anderson, the essays in Against the Wall describe how the young black man has come to be identified publicly with crime and violence. In reaction to his sense of rejection, he may place an exaggerated emphasis on the integrity of his self-expression in clothing and demeanor by adopting the fashions of the "street." To those deeply invested in and associated with the dominant culture, his attitude is perceived as profoundly oppositional. His presence in public gathering places becomes disturbing to others, and the stereotype of the dangerous young black male is perpetuated and strengthened.To understand the origin of the problem and the prospects of the black inner-city male, it is essential to distinguish his experience from that of his pre-Civil Rights Movement forebears. In the 1950s, as militant black people increasingly emerged to challenge the system, the figure of the black male became more ambiguous and fearsome. And while this activism did have the positive effect of creating opportunities for the black middle class who fled from the ghettos, those who remained faced an increasingly desperate climate.Featuring a foreword by Cornel West and sixteen original essays by contributors including William Julius Wilson, Gerald D. Jaynes, Douglas S. Massey, and Peter Edelman, Against the Wall illustrates how social distance increases as alienation and marginalization within the black male underclass persist, thereby deepening the country’s racial divide.

More books like Against The Wall: Poor, Young, Black, And Male (The City In The Twenty-First Century) may be found by selecting the categories below: