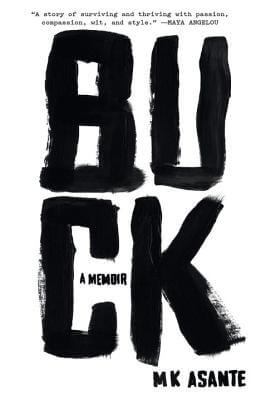 Buck: A Memoir
by MK Asante

Book Description:
A rebellious boy’s journey through the wilds of urban America and the shrapnel of a self-destructing family—this is the riveting story of a generation told through one dazzlingly poetic new voice.

MK Asante was born in Zimbabwe to American parents: a mother who led the new nation’s dance company and a father who would soon become a revered pioneer in black studies. But things fell apart, and a decade later MK was in America, a teenager lost in a fog of drugs, sex, and violence on the streets of North Philadelphia. Now he was alone—his mother in a mental hospital, his father gone, his older brother locked up in a prison on the other side of the country—and forced to find his own way to survive physically, mentally, and spiritually, by any means necessary.

Buck is a powerful memoir of how a precocious kid educated himself through the most unconventional teachers—outlaws and eccentrics, rappers and mystic strangers, ghetto philosophers and strippers, and, eventually, an alternative school that transformed his life with a single blank sheet of paper. It’s a one-of-a-kind story about finding your purpose in life, and an inspiring tribute to the power of education, art, and love to heal and redeem us.

“A story of surviving and thriving with passion, compassion, wit, and style.”—Maya Angelou

“In America, we have a tradition of black writers whose autobiographies and memoirs come to define an era. . . . Buck may be this generation’s story.”—NPR

“The voice of a new generation. . . . You will love nearly everything about Buck.”—Essence

“A virtuoso performance . . . [an] extraordinary page-turner of a memoir . . . written in a breathless, driving hip-hop prose style that gives it a tough, contemporary edge.”—The Philadelphia Inquirer

“Frequently brilliant and always engaging . . . It takes great skill to render the wide variety of characters, male and female, young and old, that populate a memoir like Buck. Asante [is] at his best when he sets out into the city of Philadelphia itself. In fact, that city is the true star of this book. Philly’s skateboarders, its street-corner philosophers and its tattoo artists are all brought vividly to life here. . . . Asante’s memoir will find an eager readership, especially among young people searching in books for the kind of understanding and meaning that eludes them in their real-life relationships. . . . A powerful and captivating book.”—Hector Tobar, Los Angeles Times

“Remarkable . . . Asante’s prose is a fluid blend of vernacular swagger and tender poeticism. . . . [He] soaks up James Baldwin, Zora Neale Hurston and Walt Whitman like thirsty ground in a heavy rain. Buck grew from that, and it’s a bumper crop.”—Salon

“Buck is so honest it floats—even while it’s so down-to-earth that the reader feels like an ant peering up from the concrete. It’s a powerful book. . . . Asante is a hip-hop raconteur, a storyteller in the Homeric tradition, an American, a rhymer, a big-thinker singing a song of himself. You’ll want to listen.”—The Buffalo News

More books like Buck: A Memoir may be found by selecting the categories below:

Tell us what do you think about Buck: A Memoir.