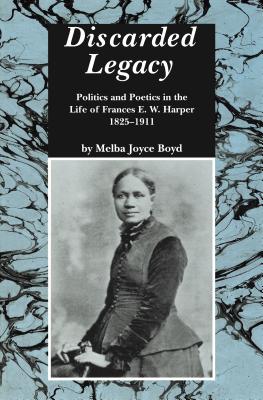 Book Description:
Frances E. W. Harper is a central figure in the history of nineteenth- and twentieth-century African-American literature and intellectual thought. The foremost poet of the "free colored community," she was also a lecturer,
educator, essayist, and novelist. A prolific champion of the abolitionist and feminist causes, she has come to be recognized for the critical role she played in the rise of the women’s movement, particularly in the development of the black women’s movement. Yet neither her art nor her political insight was preserved by subsequent generations until recently.In this important study, poet Melba Joyce Boyd analyzes Harper not simply as a feminist and an activist, but as a writer. Boyd reads her in context, placing Harper’s life, poetry, novels, and speeches within the nineteenth century African-American quest for
"freedom and literacy."Harper’s genius is illuminated as Boyd traces her radicalism through her struggles with issues of race, gender, and class, and the other personal and social injustices she
confronted. Discarded Legacy comprises three parts: "The Abolitionist Years," "The Pursuit of the Promised Land," and "The Woman’s Era." These divisions characterize the thrust of the historical periods which encompass Harper’s lifetime and the thematic
focus of her writings. Though Harper’s primary political emphasis is on slavery and the Reconstruction, she sustains a strong feminist voice throughout these times and in all of her writings. Likewise, during the women’s era, she maintains an anti-racist stance and strongly criticizes racism in white
feminist politics.Boyd’s response to Harper’s work is interactive and improvisational, and whenever possible, she maintains Harper’s voice, allowing her to speak about her own work. When analyzing Harper’s language, Boyd provides insight into Harper’s aesthetic by
discussing the writings thematically and structurally within a biographical framework. Finally, by examining Harper’s use of traditional poetic techniques, language, oral tradition forms, and other tools, Boyd
demonstrates how Harper’s art and politics are synthesized into a dynamic whole.This book weaves Harper’s radical vision with the intuitive and analytical dimensions of her imagination and language. Through perceptive explication of Harper’s writings and
consideration of her thematic inclinations and political and social affiliations, Boyd is able to show how Harper crafted her subjects and how the literature and speeches interrelated
in theme and historical experience. Boyd has successfully arranged Harper’s work in a manner that connects our present to Harper’s past and that re-envisions her consciousness.

More books like Discarded Legacy: Politics and Poetics in the Life of Frances E. W. Harper, 1825-1911 may be found by selecting the categories below:

Tell us what do you think about Discarded Legacy: Politics and Poetics in the Life of Frances E. W. Harper, 1825-1911.