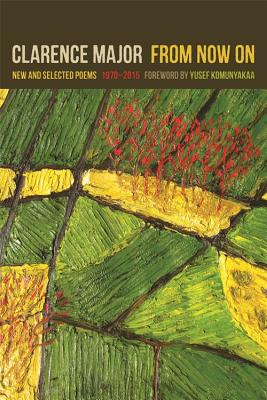 Paperback Description:
Clarence Major is a consummate artist whose work in poetry, fiction, and painting has been widely recognized. He has been part of twenty-eight group exhibitions, has had fifteen one-man shows, and has published fourteen collections of poetry and nine works of fiction. Major’s works?and this collection in particular?are distinguished by his poetic sociability and his unblinking but generous and affectionate portraiture.In From Now On, a retrospective of poems from the 1950s to the present?including selections from each of Major’s previous books of poetry as well as a generous selection of new poems?Major creates a vivid gallery of nimbly drawn characters. Here he establishes a voice that is singular and musical, one that draws witty, moving, and empathetic portraits of African American urban and country dwellers. Ultimately, this collection maintains Major’s intimate, conversational poetry while simultaneously becoming more eclectic, multicultural, and cosmopolitan. Major’s poetry is affable, but it suggests an insistence that we can connect with history and social change through the dynamic lives of the people we encounter daily.

More books like From Now On: New and Selected Poems, 1970-2015 may be found by selecting the categories below: