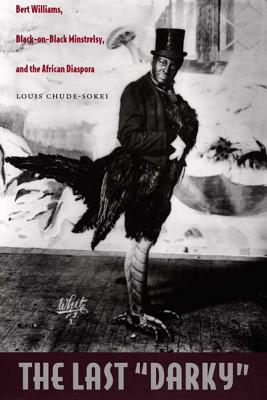 Book Description:
The Last “Darky” establishes Bert Williams, the comedian of the late nineteenth century and early twentieth, as central to the development of a global black modernism centered in Harlem’s Renaissance. Before integrating Broadway in 1910 via a controversial stint with the Ziegfeld Follies, Williams was already an international icon. Yet his name has faded into near obscurity, his extraordinary accomplishments forgotten largely because he performed in blackface. Louis Chude-Sokei contends that Williams’s blackface was not a display of internalized racism nor a submission to the expectations of the moment. It was an appropriation and exploration of the contradictory and potentially liberating power of racial stereotypes.Chude-Sokei makes the crucial argument that Williams’s minstrelsy negotiated the place of black immigrants in the cultural hotbed of New York City and was replicated throughout the African diaspora, from the Caribbean to Africa itself. Williams was born in the Bahamas. When performing the “darky,” he was actually masquerading as an African American. This black-on-black minstrelsy thus challenged emergent racial constructions equating “black” with African American and marginalizing the many diasporic blacks in New York. It also dramatized the practice of passing for African American common among non-American blacks in an African American dominated Harlem. Exploring the thought of figures such as Booker T. Washington, W. E. B. Du Bois, Marcus Garvey, and Claude McKay, Chude-Sokei situates black-on-black minstrelsy at the center of burgeoning modernist discourses of assimilation, separatism, race militancy, carnival, and internationalism. While these discourses were engaged with the question of representing the “Negro” in the context of white racism, through black-on-black minstrelsy they were also deployed against the growing international influence of African American culture and politics in the twentieth century.

More books like The Last ’Darky’: Bert Williams, Black-on-Black Minstrelsy, and the African Diaspora (a John Hope Franklin Center Book) may be found by selecting the categories below:

Tell us what do you think about The Last ’Darky’: Bert Williams, Black-on-Black Minstrelsy, and the African Diaspora (a John Hope Franklin Center Book).