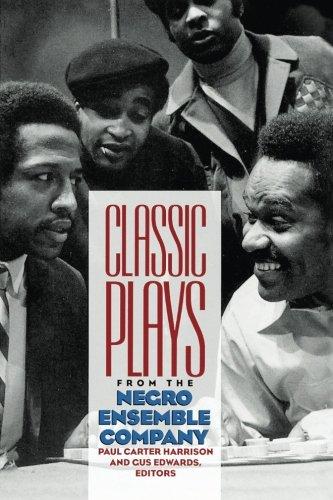 Paperback Description:
This anthology celebrates more than twenty-five years of the Negro Ensemble Company’s significant contribution to American theater. Collected here are ten plays most representative of the eclectic nature of the Negro Ensemble Company repertoire.The Negro Ensemble Company (NEC) was formed in New York City in 1967 with support from the Ford Foundation to aid in the establishment of an independent African-American theater institution. Under the artistic directorship of Douglas Turner Ward, the NEC offered a nurturing environment to black playwrights and actors who could work autonomously, guaranteeing authenticity of voice, full freedom of expression, and exploration of thematic views specific to the African-American experience.Since its inception, the NEC has introduced audiences to more than 150 theatrical works. Classic Plays from the Negro Ensemble Company allows scholars to review a diversity of styles which share common philosophical, mythic, and social ideals that can be traced to an African worldview. A foreword by Douglas Turner Ward and an afterword by Paul Carter Harrison and Gus Edwards assess the literary and/or stylistic significance of the plays and place each work in its historical or chronological context.

More books like Classic Plays From The Negro Ensemble Company may be found by selecting the categories below: