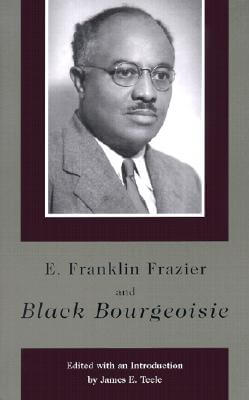 Hardcover Description:
When E. Franklin Frazier was elected the first black president of the American Sociological Association in 1948, he was established as the leading American scholar on the black family and was also recognized as a leading theorist on the dynamics of social change and race relations. By 1948 his lengthy list of publications included over fifty articles and four major books, including the acclaimed Negro Family in the United States. Frazier was known for his thorough scholarship and his mastery of skills in both history and sociology.With the publication of Bourgeoisie Noire in 1955 (translated in 1957 as Black Bourgeoisie), Frazier apparently set out on a different track, one in which he employed his skills in a critical analysis of the black middle class. The book met with mixed reviews and harsh criticism from the black middle and professional class. Yet Frazier stood solidly by his argument that the black middle class was marked by conspicuous consumption, wish fulfillment, and a world of make-believe. While Frazier published four additional books after 1948, Black Bourgeoisie remained by far his most controversial.Given his status in American sociology, there has been surprisingly little study of Frazier’s work. In E. Franklin Frazier and Black Bourgeoisie, a group of distinguished scholars remedies that lack, focusing on his often-scorned Black Bourgeoisie.This in-depth look at Frazier’s controversial publication is relevant to the growing concerns about racism, problems in our cities, the limitations of affirmative action, and the promise of self-help.

More books like E. Franklin Frazier and Black Bourgeoisie may be found by selecting the categories below: