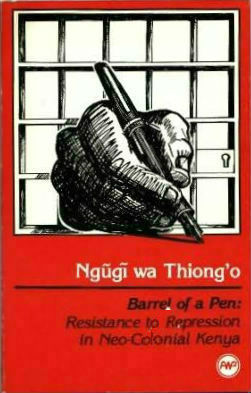 Barrel of a Pen: Resistance to Repression in Neo-Colonial Kenya
by Ngũgĩ wa Thiong’o

This book is a collection of essays by the prominent Kenyan novelist and playwright, Ngugi wa Thiong'o. These collected essays vigorously respond to the atmosphere of repression and domination in Kenya. Ngugi argues that the defense of national culture and national identity is central in the overall struggle against regimes of repression and imperialist domination.

This thesis was tested on the ground by Kenyan cultural workers and activists who, in collaboration with peasants and workers, attempted to develop and express their culture. In the late 1970's they performed such plays as Ngaahika Ndeenda (I Will Marry When I Want) and went on to form the Kamiriithu Educatio and Cultural Center. The Kenyan government responded brutally to these developments of cultural assertion, and by March 1982 the Center was razed to the ground, and all drama and theatre activities in the area of Kamiriithu were banned. Ngugi reflects on the experience of Kamiriithu, but broadens its lessons to the overall experience of the present situation in Kenya. These essays speaks to the issues of cultural domination and resistance as well as focusing on the political currents impacting on the overall social and political condition in Africa and the world. Ngugi here challenges African intellectuals and Kenyans in particular to rise and speak out against oppression and domination so that the "iron hand of the oppressors may not be strengthened by the silence of those who have refused to speak out."

Barrel of A Pen is very much in the tradition of Ngugi's earlier collection of essays: Homecoming and Writers in Politics.

More books like Barrel of a Pen: Resistance to Repression in Neo-Colonial Kenya may be found by selecting the categories below: