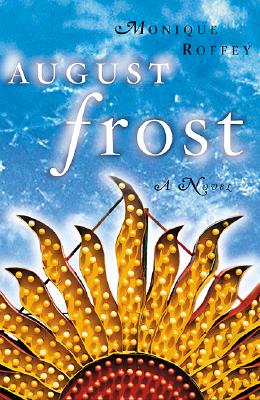 Hardcover Description:
A sparkling first novel, August Frost is a story of transformation and self-discovery from a writer of tremendous originality and maturity. August is a tall, pale, painfully shy young man with blood-orange hair and sun-shy eyes who hides his awkwardness working behind the counter of the gourmet deli in London’s Shepherd’s Bush neighborhood. One winter day he finds a rash on his arm that resembles the crystalline frost on his windowpane. Later, snow begins to fall around his head, and his fingers turn blue. Is it some rare disease that has triggered this strange reaction, or the appearance in the neighborhood of his mother’s old lover, Cosmo? Could it even be an allergy to the deli’s new orange cheese, which seems to mock his own coloring? As Cosmo taunts him with doubts about the identity of his father, August’s body changes with the seasons. Through a year’s wonderful metamorphosis snowstorm, heat wave, eclipse, and a search for the truth August changes into himself. August Frost is an enchanting book of extraordinary freshness and sensuality. Mingling lyrical depth and subtle wisdom, it will resonate in readers’ hearts long after the last page is turned.

More books like August Frost may be found by selecting the categories below: