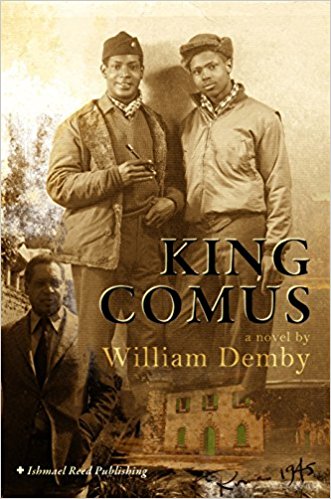 Book Description:
With this publication of the novel “King Comus,” William Demby caps his already great literary achievements as the author of the now classic novels “Beetlecreek (1950),” “The Catacombs (1965),” and “Love Story Black (1978).” The product of twenty years of literary labor, “King Comus” was completed in 2007, and remained in manuscript form at the time Demby died in 2013. The last of the Black novelists who served in World War II, Demby was honored with the Anisfield-Wolf Lifetime Achievement Award in 2006. In “King Comus,” William Demby employs a cinematic-like style to track the paths of an escaped slave, two African American World War II servicemen, their white commanding officer and a black female gospel singer as they converge in a time-bending tale of survival and kinship. Narrated in part by his descendant, Tillman, a World War II GI serving in Italy, it follows the escaped slave and master musician, known as King Comus, on his extraordinary journey to freedom. Tillman relates his family’s history to a fellow serviceman named D., whose role in this mysterious tale includes some parallels to the author’s life story. When the plotline turns to the twenty-first century, these veterans unite in Italy with their white commanding officer, Joe Stabat, to stage a colossal global gospel summit in Rome, featuring the gospel star, Little Antioch. “King Comus” weaves elements of the neo-slave narrative and Afrofuturism into a panoramic vision encompassing the forces of empire, race, gender, and religion. It may well come to be considered Demby’s masterpiece.