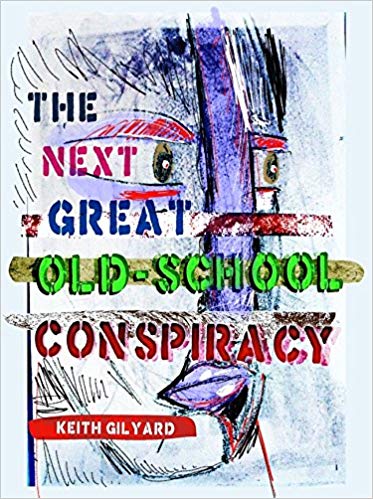 The Next Great Old-School Conspiracy
by Keith Gilyard

Book Description:
The Next Great Old-School Conspiracy lives up to its provocative title. This is a work of wonder, a crisp percussive narrative carrying a heavy load with style and grace—-novella lean and smokehouse mean. The plot delivers twist after intuitive twist, and, as only good literature can, the story illuminates pertinent dynamics of life and art and culture in our times and the imperatives of survival in a complex world. It is an embodiment of literature’s place and function in the human condition. ——Arthur Flowers Black novels nowadays are divided between ’hood novels and the post-race novels of the black millinneal class. Rarely does a writer traverse as many cultural zones as Keith Gilyard in "The Next Great Old-School Conspiracy." He has a good ear, an eye for detail, and his writing is lean and sharp. His mentor, John O. Killens, would be proud. Ishmael Reed Born in Harlem and raised in Queens, Keith Gilyard began writing for publication in the early 1970s when he was a participant in workshops at the Langston Hughes Library & Cultural Center. He earned academic degrees from the City University of New York (1974), Columbia University (1979), and New York University (1985). In 2012, he served as president of the National Council of Teachers of English. Gilyard is author or editor of 20 books, including the education memoir Voices of the Self (1991) and a biography of writer/activist John Oliver Killens (2010). He received an American Book Award for each of these projects. His poetry volumes include American 40 (1993), Poemographies (2001), How I Figure (2003), and Wing of Memory (2015). The Next Great Old-School Conspiracy (2016) is his first published work of fiction. Gilyard has been on the faculty of several schools, including Medgar Evers College and Syracuse University. He currently serves as the Edwin Erle Sparks Professor of English and African American Studies at Penn State.

Tell us what do you think about The Next Great Old-School Conspiracy.