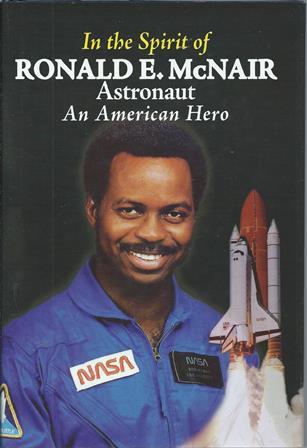 In the Spirit of Ronald E. Mcnair, Astronaut, An American Hero
by Carl S. McNair

In the Spirit of Ronald E. McNair - Astronaut is an intensely moving story about one of the world’s first African-American space shuttle astronauts. Born and reared in a small town in rural segregated South Carolina, McNair did not let impoverish beginnings or the color of his skin stand between him and his goal of becoming an astronaut.

Dr. McNair combined a remarkable life and career as a research scientist, pioneering astronaut, family man, jazz musician, karate expert, and a man of faith. His lifelong commitment was to continue his quest to inspire and encourage students to dream big, work hard and accomplish their goals. As a crusader for education, he spoke before the Massachusetts State Legislature on education, Dr. McNair proclaimed,

I believe that in our urban and rural cities there are great minds and talents with hands that can control a spacecraft with the same dexterity that they control and handle a basketball. These talents must not be wasted.”

Ronald McNair is an American hero whose story serves as a model for people from all walks of life. His story is one that must be passed on from generation to generation.