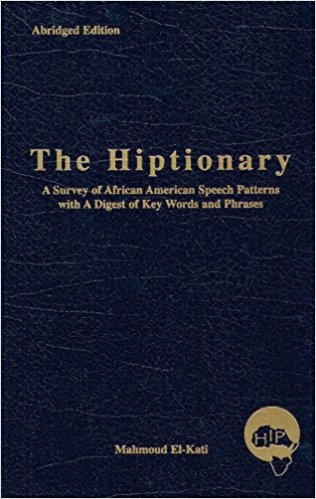 The Hiptionary: A Survey Of African American Speech Patterns With A Digest Of Key Words And Phrases
by Mahmoud El-Kati

Read Our Review of The Hiptionary: A Survey Of African American Speech Patterns With A Digest Of Key Words And Phrases

Leather Bound Description:
Hiptionary? It is a made-up word, as are all words. Its meaning evolves from the word hip, as in being aware, out front on the latest ideas, in the vanguard. Hip belongs to a special vocabulary of words, and we owe their existence to the struggles, style, and spirit of the Black Americans and their creative approach to the English language. It flows from an improvisational context of making a way out of no way. From the crucible that was the American legal institution of enslavement and segregation, Black Americans were forced by time and circumstances to create an original and arresting expression of the English language. The first stage of this process began in Colonial America. From then, and onward, these distinct patterns of speech of the African Americans continued to evolve. So much so that these powers of speech have helped to influence, mold, and shape the way America speaks.
Throughout the cultural evolution of the United States, Black people have consistently contributed a huge stock of colorful words, phrases, sayings, phonics, and other linguistic devices, some of which were brought from Africa. In every period of American history, the pervasive presence of African people s artistic gifts have served as a source of inspiration; from the slave era of the spirituals and the minstrels; through post-slavery and ragtime of the Gay Nineties; New Orleans jazz and the boogie woogie piano; swing and bebop; rhythm and blues, rock n roll, and rap.
Hiptionary refers to well-established traditions of African American speech patterns, with changes and adaptations as the years go by. They are, strictly or grammatically speaking, non-dictionary words. The attempt in this volume is to collect representative samples (from every era) of this ongoing and influential part of American English, and give due recognition to it as a major force in shaping the way American English is spoken.