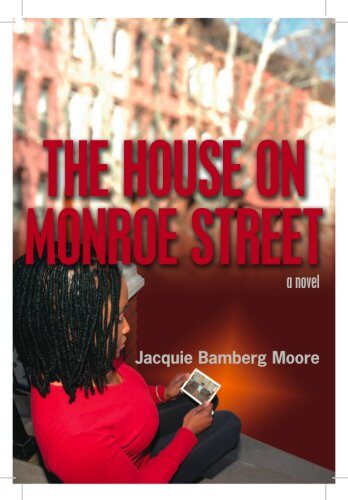 The House on Monroe Street
by Jacquie Bamberg Moore

Paperback Description:
As a child, Norma Jean (Gina) Booker was told she was too dark, too ugly, and too nappy-headed to amount to anything. And she believed it. The kids in school teased her, a family member had molested her, and nobody liked her. She hardly liked herself. By the time she got to ninth grade, she had figured out how to at least make the boys like her. She was sneaky and daring and there was nothing sexually off limits. Now in her mid-thirties, married, and a mother of two, Gina is reflective on the emotionally troubled childhood that left her scarred, insecure, and hating the house in Bedford-Stuyvesant Brooklyn where she was born and raised. In search of closure, Gina talks to her mother, Margie. After listening to the stories of abandonment and growing up poor in Cottonville, North Carolina, Gina s views of her mother—and herself—slowly begin to shift. Margie reveals some of the family’s deeply buried secrets, twisted truths, and the shameful course of events that led them to the house on Monroe Street. But is knowing her history enough to heal old wounds? And can the Booker women stop the vicious cycle of generational dysfunction that burdens them?