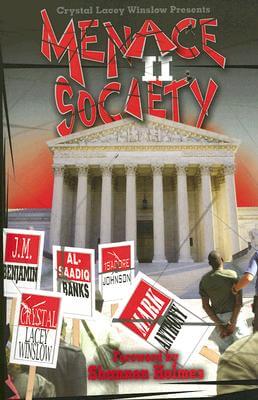 Menace II Society is a gritty work of fiction that captures the allure of sex, money, murder and power. These bestselling authors have collaborated on a page-turner.

Cagney & Lacey, Crystal Lacey Winslow
When two felons growing up on opposite coasts meet’the attraction is magnetic. When Lacey’s past comes back to haunt her’Cagney’s love is put to the test. Will Cagney ride or die for his lady? Just like a modern day Bonnie and Clyde, these two embark on a killing spree in their quest to leave the past behind. Lace is also the Essence bestselling author of Life, Love & Loneliness and The Criss Cross. She also collaborated on an Essence and Blackboard bestselling novel, Four Degrees of Heat and a contributor in the novel, Kiss the Year Goodbye. She’s just completed her third novel, Sex, Sin & Brooklyn II. Lace is the founder of Melodrama Books & Things and Melodrama Publishing which published the #1 Essence bestselling novel, Wifey.

Walk with Me, Al-Saadiq Banks
Newark, New Jersey is eager to get rid of the infamous, Miracle. A predicate with a long list of felonious crimes. When he’s arrested for the brutal murders of his two co-defendants, he realized that his life is over. Walk with Me by Al-Saadiq Banks walks you through the seemingly dark life of Miracle, capturing the ironic circumstance of being in the wrong place at the wrong time.

Al-Saadiq Banks is a resident of Newark, New Jersey and the author of bestselling novels No Exit, Block Party, Sincerely Yours and Caught ’em Slippin’. The founder of True 2 Life Productions, he is currently working on his fifth novel, Block Party 2.

Snake Eyes, Mark Anthony
Keep your friends close and your enemies closer. That’s the old adage in the ’hood. But what happens when your friend is your enemy? All hell breaks loose in Snake Eyes. Mark Anthony weaves a dramatic street tale that will leave you on the edge of your seat!
Mark Anthony is the Essence bestselling author of Paper Chasers, Dogism and his newly released page-turner, Lady’s Night. He is a resident of Queens, New York and the founder of Q-Boro Books.

The Deceitful; Hunted, Isadore Johnson
Quawi Ubati’s desperation to hold on to his billion dollar cocaine empire built by blood and fear has led him to hunt down two men responsible for the ultimate betrayal. This notorious Nigerian drug lord unleashes havoc that not even the powerful F.B.I. could withstand in order to find and kill these individuals who he once trusted before planning the ultimate escape. Isadore Johnson is the author of the rapid selling double street novels, Drug Dealer Part 1 & 2. He is currently working on his third novel, Snitch.

Keepin’ it Gangsta, J.M. Benjamin
Keepin’ it Gangsta is the only way the notorious ’Dicer’ knows how to live. Feared by many because of his murderous and infamous reputation, he still finds a soft spot in his black heart to hold down the only woman that ever truly loved him. But in true ’Dicer’ fashion he can only keep it gangsta! JM Benjamin is the author of Down in the Dirty.

Books similiar to Menace II Society may be found in the categories below: