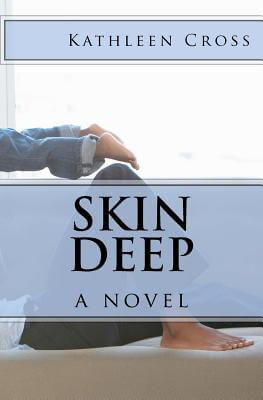 Biracial but white-looking, Nina Moore is the daughter of a rich and famous black musician and a deceased white woman no one in the family will talk about. Burdened with secrets her father refuses to divulge, Nina finds that living as a black woman in white skin, she’s attracting the wrong men, receiving privileges she didn’t earn and running from a past she didn’t create. After dumping her colorstruck fiancé, Nina falls for Ahmad Jefferson, a sexy and intriguing ex-convict and single father who has no love for white folks and won’t give her the time of day. While Ahmad focuses on raising his young daughter alone, he makes it clear his friendship with Nina will never develop into anything more, and as he searches for a "real sista" to invite into his life, Nina uncovers a family secret that loosens her hold on everything that has ever held her upright. 2nd Edition. First edition published by Avon Books, New York, August 1999.

Skin Deep a novel that can enrage, inspire and entertain.

“Skin Deep is not the story of this author’s life, however it does reflect the journey I have been on while living on this planet as a culturally Black-identified “biracial” woman who is often mistaken for White.

The idea for Skin Deep began to take shape in 1990 with an article I wrote for EBONY magazine entitled “Trapped in the Body of a White Woman,” a tongue in cheek title (How can one be “trapped” in a body fashioned by the Creator?) that described the frustration of my experiences as an African American woman (who is one-half White, and appears to be no parts Black) living in a relatively small town in the Pacific Northwest.

I received mail from all over the world in response to that article saying how refreshing it was to see the issue of “biracialness” being covered in a way that honored African ancestry and did not attempt to further disconnect biracial children from their Blackness, nor did it send a message of contempt for Whiteness.

I have received criticism as well, from people who believe that “biracial” African Americans really are not Black; that they are a separate and distinct community and should be labeled as such. I respect their right to disagree and invite them to read Skin Deep.

In my life and in my calling as a writer, I continue to investigate and honor the extremely diverse experiences of “people of African descent” in all our beautiful shades and visible (and in some cases not-so-visible) manifestations of the melanin messages delivered to us from our ancestors in our DNA. That investigation has led me to believe that at our very core, we humans are most distressed by the disunity our skintones create. And somewhere very deep, we yearn for (and are afraid to believe in) a time when those differences will be the source of esteem and respect, not pain and fear. *Our most recent scientific research indicates that the term “people of African descent” refers in its truest meaning to the entire human race. I use that meaning here. The effect skin color has on our interpersonal and intercultural relationships is, to say the least, profoundly “deep,” and Skin Deep attempts to tell one fictional woman’s story of how tricky the interplay of “race,” skin color and identity can be.

I warn readers of Skin Deep to prepare themselves to meet characters that can be disappointing and outrageous or inspirational and uplifting in that they reflect our current society to us in realistic ways, (You’re sure to recognize a few people you know) but I also invite readers to enjoy the underlying message in Skin Deep – Love is woven into “race” in ways that can enrage, inspire and entertain.”

Books similiar to Skin Deep may be found in the categories below: