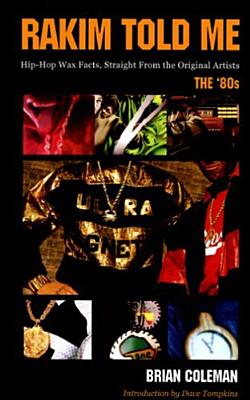 Book Description:
For years, hip-hop fans have been robbed of context and background when buying and enjoying classic albums from the Golden Age: the 1980s. Rakim Told Me brings you these invisible liner notes, one album at a time, with new angles and engaging stories. 21 albums are examined in-depth, and facts are uncovered with the turn of every page. Journalist Brian Coleman has, over the past decade, immersed himself in and written about the hip-hop art form as a columnist for national magazines like XXL, Scratch, CMJ and URB. In this volume, The 80s, he digs deep, one-on one, with legendary artists like Rakim, De La Soul, Ice-T, Public Enemy, KRS-One, Run-DMC, Slick Rick, Too $hort and many more. Rakim Told Me lets you dive head first into the world of your favorite hip-hop artists and the classic albums they produced. These are pure wax facts straight from the original artists, broughtto the surface again after years of invisibility. So dig out your turntable, clean off your Zulu Nation medallion, crack open a chapter, and relive hip-hop s most creative and captivating era.

More books like Rakim Told Me: Wax Facts Straight from the Original Artists—The ’80s. may be found by selecting the categories below:

Tell us what do you think about Rakim Told Me: Wax Facts Straight from the Original Artists—The ’80s..