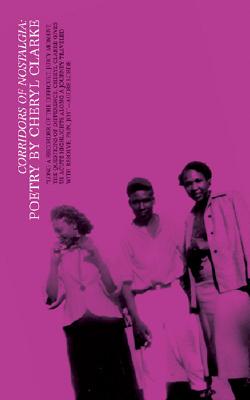 Book Description:
Corridors of Nostalgia is the fifth collection of poetry by prominent outspoken African-American lesbian feminist poet Cheryl Clarke, and her first since 1993. Appropriately, the volume opens with "Living as a Lesbian Fin de Siecle," whose speaker condemns the atrocities of the late 20th century—"burning Indochine flesh." With her characteristic deprecating and self-deprecating vigor, Clarke drives the reader over the landscape of remembrances and losses: from the loss of pubic hair ("bald woman") to the loss of life in the World Trade Center disaster in New York City on September 11, 2001 ("Urban Epitaphs"). Corridors of Nostalgia is indeed a hard ride through the late 20th century, as the poet drops the anxious reader on the stoop of the early 21st. Poems like "Women in Uniform" and "A Sister’s Lament" reprise Clarke’s concern for black women who enter the formerly all-male preserves of the police and armed forces. The impact of popular culture icons on odd and ordinary life and perceptions play out in poems like "james dean longing," "Billie Holiday," and "Black Men." "The Letter" and "Please read" add to Clarke’s repertoire of poems that memorialize the period of African enslavement in the U.S. "Brooklyn," "taking head," and "reprise (for Ginsberg)" make us engage the poet’s acquiescence to sexual imagining, once again, in the realm of popular culture. Corridors is rich and wry with the varied themes of the pleasures and dangers in everyday life. Cheryl Clarke’s new volume challenges, probes, and picks at the reader. She remains committed to lesbian poetics and politics, tough and tight writing, songs of blackness, and the complicit you-I.

More books like Corridors of Nostalgia: Poetry by Cheryl Clarke may be found by selecting the categories below:

Tell us what do you think about Corridors of Nostalgia: Poetry by Cheryl Clarke.