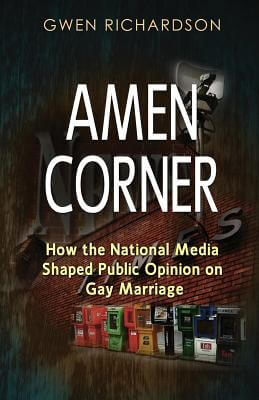 Paperback Description:
In 2004, Gallup polls showed that 42 percent of Americans supported gay marriage. Eight years later, by the end of 2012, support had jumped to 53 percent. Public opinion seemed to change at a rapid pace, almost overnight. How did it shift so quickly? The answer is: the media. In the same way that a small cadre of enthusiastic supporters in the amen corner of a church agrees with the preacher’s every utterance from the pulpit, the media have been consistent champions for gay marriage and lesbian-gay-bisexual-transgender (LGBT) causes. Through a carefully orchestrated system of selective reporting, slanted coverage and rewards and punishments, national media have gradually nudged public opinion in the direction of approval of gay marriage. Amen Corner: How the National Media Shaped Public Opinion on Gay Marriage examines the methods used by the media to promote gay marriage over the past 20 years, the effects of its promotion on the public discourse, and a plan of action consumers can utilize to be better informed as the debate on this important issue moves forward.

More books like Amen Corner: How The National Media Shaped Public Opinion On Gay Marriage may be found by selecting the categories below: