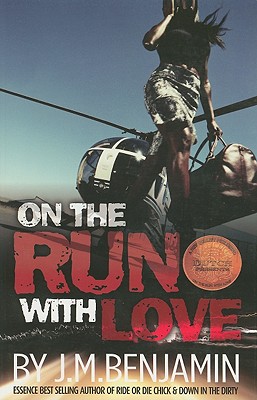 On The Run With Love
by J.M. Benjamin

Book Description:
Freddie Holmes could’ve wrote the book on How to Be A Player. With his good looks, gift of gab, his Jersey swag, and ability to put it down in the bedroom, his only source of income is the women he manipulates. But after meeting Simone, his new fiance, he decides to hang up his womanizing gloves, so he says, but not before his past catches up to him. Slug is a stick up kid/ hustler from the dirty south. After losing his drug connect, he uses his trip to New Jersey for a funeral as an opportunity to link up with his cousin Freddie in hopes of finding a new supplier. Freddie wants to show his cousin a good time, Jersey style, while he’s visiting, only he chooses the wrong place-wrong time to do so. At the end of the night, two people are left in their on blood, one, the younger brother of a known drug dealer, the other, a cop. Freddie is forced to make some quick decisions. To evade his situation he takes his cousin up on his offer, relocates to North Carolina, and changes his profession, but not without his soon to be wife Simone. Simone gives up everything to go on the run with her man, all in the name of love, and gets a dose of reality. She had no idea what she had signed up for as she takes a good look at her life with Freddie. See how Freddie Holmes learns the hard way that you can run but you can’t hide forever…

More books like On The Run With Love may be found by selecting the categories below:

Tell us what do you think about On The Run With Love.