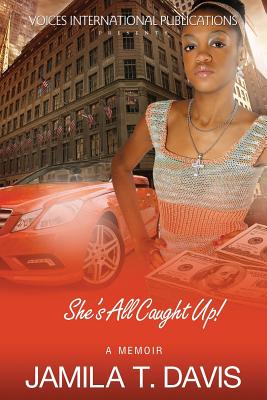 She’s All Caught Up!.
by Jamila T. Davis

Paperback Description:
She’s All Caught Up!
She’s All Caught Up is a cautionary tale for young people enamored by the fast life and the older folks that love them. This memoir tells of the negative influences that swayed the early life of author Jamila T. Davis (creator of the Voices of Consequences Enrichment Series). She is currently serving a 151 month sentence for her role in a multi-million dollar bank fraud scheme.

Young Jamila grew up in a loving, middle class home. Her hardworking parents, the Davises, overcame the barriers of poverty and racism faced by African Americans in the segregated South. From the back wood shacks of the rural south, the Davises migrated north, making Jamaica Queens, New York their new home. They drove themselves relentlessly. By education and endless hard work, they attained their portion of the American dream.

Determined to afford their own children the opportunities they themselves never had, the Davises provided their children with a good life, hoping to guarantee their children’s success.

At first, it seemed as though the formula worked. Jamila became her parents’ ideal "star child." At a young age she performed in dance recitals at Lincoln Center and toured the country in a leading role in an off- Broadway play. Throughout elementary and middle school she maintained straight A’s and was accepted to the acclaimed "Fame" High School of Performing Arts in New York City.

All was copacetic until high school years, when Jamila meets Craig. He was a 16 year old drug dealer from the Southside projects of Jamaica Queens. His street edge fascinated naive Jamila, and he quickly usurped Mrs. Davis’ position as role model and protector.

Jamila became mesmerized by the hustlers and life in the inner city ghetto. Her values quickly changed. She wanted independence, power and notoriety, and she chose life in the fast lane to claim them. With her brains and beauty, she rises to the top!

As this high school teen rebels, breaking loose from her parents’ tight reins, the Davises wage an "all-out" battle to save their only daughter who they love so desperately. But Jamila is in too deep! Poisoned by materialism and the drama of street life, she resists, and the Davis family is turned upside down!

This real-life story exemplifies the powerful societal influences that affect today’s youth, and the almost insurmountable challenges of the older generation who fight hard to protect them. This heartfelt story empowers both youth and adults to understand the tragic consequences of poor choices while instilling the ability to resist them.

When this good girl goes bad, it seems as if there is no turning back.

SHE’S ALL CAUGHT UP!

More books like She’s All Caught Up!. may be found by selecting the categories below: