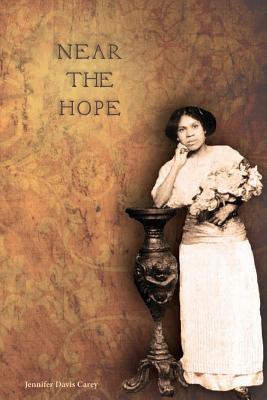 Near The Hope
by Jennifer Davis Carey

It is the sharp turn of the twentieth century, and Barbados is an island emptying out, as young men chase their fortunes on the Panama Canal or a merchant’s vessel, and women seek the promise held in passage to the United States. In striking contrast, New York is an island swelling with hopeful arrivals from foreign shores keen to make their way on level soil. In the thick of this rush is young Ruth Adele “Dellie” Standard, an immigrant eager to be freed from the cycles of sugar cane and the whims of the colonial manor to craft a life of her own, one that is far more than a piece of someone else’s. Near the Hope is an evocative debut work of fiction by Jennifer Davis Carey that draws from the author’s Caribbean ancestry to tell Dellie’s story. Blending history, folk practices, and the richness of another place and time, Near the Hope moves from the exotic and lush world of Barbados to the hazy glow of New York in the gaslight era to probe questions of home, family, and what we choose to hold on to and what we choose to let go. While it captures Dellie’s journey with poignancy and authenticity, this deeply affecting and lyrical work also mirrors the narrative of thousands of West Indian women. Like them, abandoning her Caribbean home for a new destiny, Dellie is confronted with a world that often poses as many new challenges as new chances.

An Excerpt from Carey’s Novel Near the Hope

They began the walk up toward Taborvilla. The breeze from the hills teased the ribbon on Dellie’s straw hat and lapped at the frayed edges of Pendril’s shirt. Around them the variegated green patches, the pale green of the young cane pushing through the deep brown soil, the deeper shinier green of the banana groves, the wild colors—flame red, orange, pink— showed God in a glorious mood.

As they reached the crest of the first rise, Dellie looked into the obeah woman’s yard.

Her place, at the spot where the two roads met, was rough, even by the standards of the poorest of the island. Boards lay askew, yard unswept, while rangy chickens futily scratched in the dirt. Scattered about was the detritus of the island’s castes. Old churns, seamstress dummies, broken wagon wheels, buckets, tubs, and farm implements flaky with rust competed for space. The scattered artifacts bore the history of the island and of the empire. An old infantry sword told one story. A register bearing names, ages, and dates documented another. A chaise on a carpet of weeds, its moldering stuffing spilling through split brocade, relayed a footnote. A dead tree hung with ancient, crumbling chemists bottles commanded one end of the yard and held its secrets close. Next to it stood an array of old boards fashioned into a shelter. It was hard to imagine how it remained standing—it appeared to lean both left and right in an endless struggle for shade cast by an old tree heavy with bees. Dellie had heard whisperings of neighbors creeping through the gate in the dark of night, seeking a charm, a chant, or a potion after hope had left them.

Dellie sucked one deep breath and straightened her shoulders to steel herself. The obeah woman had been there for all of the collective memory of the district, and yet no one could recall her given or family name. The old women of the Hope remembered her as ancient even when they were girls. Small, with quick bird-like movements, a body thin and dry like desiccated cane stalks, she was known all up and abroad the region. Always chased from the grounds of the Great House and the tenant lands, she hovered on the fringe of the poor and the poorest. Picking through the leavings of the island’s various peoples, she clothed herself in a host of strange outfits—hats once stylish, handed down from the Great House to a favorite maid or cook, and then discarded after years of wear or odd pieces of uniform from Combermere or Harrison’s College. From time to time, lace gloves from some long-ago garden party were coupled with a gunnysack, cut to accommodate head and arms. A delegation from St. George’s Church had been sent once to try to improve her situation. They were driven off with curses and threats. Her tirades against the Standard family were epic and awe-inspiring in their creativity and venom.

“There she sat next to her gate on an overturned sugar cask, picking at the frayed edge of her apron. Dellie nodded in acknowledgement of her gaze and was startled by the strength of the voice emanating from the ancient frame.

“Even a dog can bark, Miss Standard! Yuh back again from yuh fancy job in Bridgetown! They give yuh their scraps in yuh package? You will be de only one left! All de rest leaving. What is holding yuh up? Or yuh want dead in yuh yard like yuh mother? Or to be some knock-about woman? Yuh hear me, Dellie Standard? I hear you are staying.” She pointed to a stack of flaking leather account ledgers. I’ll be sure to inscribe your name then in the Roster of the Ruined. Maybe next to your mother.” She laughed—deep and guttural.

Books similiar to Near The Hope may be found in the categories below: