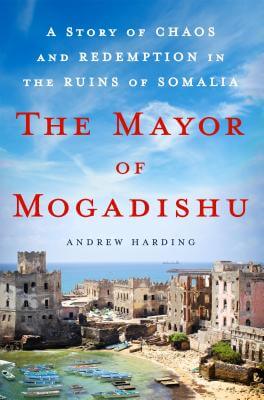 The Mayor of Mogadishu: A Story of Chaos and Redemption in the Ruins of Somalia
by Andrew Harding

Book Description:
In The Mayor of Mogadishu, one of the BBC’s most experienced foreign correspondents, Andrew Harding, reveals the tumultuous life of Mohamoud “Tarzan” Nur - an impoverished nomad who was abandoned in a state orphanage in newly independent Somalia, and became a street brawler and activist. When the country collapsed into civil war and anarchy, Tarzan and his young family became part of an exodus, eventually spending twenty years in north London.But in 2010 Tarzan returned, as Mayor, to the unrecognizable ruins of a city now almost entirely controlled by the Islamist militants of Al Shabab. For many in Mogadishu, and in the diaspora, Tarzan became a galvanizing symbol of courage and hope for Somalia. But for others, he was a divisive thug, who sank beneath the corruption and clan rivalries that continue, today, to threaten the country’s revival.The Mayor of Mogadishu is a rare an insider’s account of Somalia’s unraveling, and an intimate portrayal of one family’s extraordinary journey.

More books like The Mayor of Mogadishu: A Story of Chaos and Redemption in the Ruins of Somalia may be found by selecting the categories below: