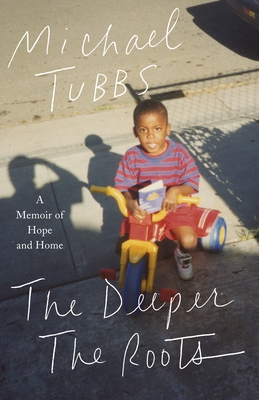 The Deeper the Roots: A Memoir of Hope and Home
by Michael Tubbs

"Don’t tell nobody our business," Michael Tubbs’s mother often told him growing up. For Michael, that meant a lot of things: don’t tell anyone about the day-to-day struggle of being Black and broke in Stockton, CA. Don’t tell anyone the pain of having a father incarcerated for 25 years to life. Don’t tell anyone about living two lives, the brainy bookworm and the kid with the newest Jordans. And also don’t tell anyone about the particular joys of growing up with three "moms"—a Nana who never let him miss church, an Auntie who’d take him to the library any time, and a mother, "She-Daddy", who schooled him in the wisdom of hip-hop and taught him never to take no for an answer. So for a long time Michael didn’t tell anyone his story, but as he went on to a scholarship at Stanford and an internship in the Obama White House, he began to realize the power of his experience, the need for his perspective in the halls of power. By the time he returned to Stockton to become, in 2016 at age 26, its first Black mayor and the youngest-ever mayor of a major American city, he knew his story meant something. The Deeper the Roots is a memoir astonishing in its candor, voice, and clarity of vision. Tubbs shares with us the city that raised him, his family of badass women, his life-changing encounters with Oprah Winfrey and Barack Obama, the challenges of governing in the 21st century and everything in between—en route to unveiling his compelling vision for America rooted in his experiences in his hometown.

Books similiar to The Deeper the Roots: A Memoir of Hope and Home may be found in the categories below: