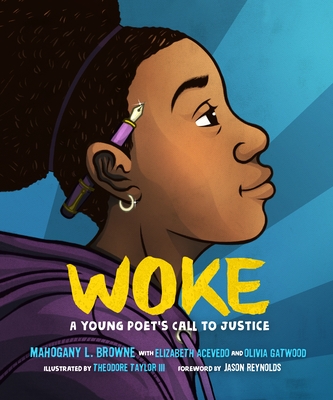 Mahogany L. Browne is a California-born, Brooklyn-based writer, organizer, mentor, and curator. She has published several books of poetry and facilitates performance poetry and writing workshops throughout the country. She is an Agnes Gund, Cave Canem, AIR Serenbe, Poets House, Rauschenberg fellow, and the current artistic director of Urban Word NYC. Her previous books for young readers include Woke Baby and Black Girl Magic.

Theodore Taylor III is an artist and designer. He is the winner of the John Steptoe New Talent Award for his work in When the Beat Was Born, and is the illustrator of Woke Baby. He lives in Richmond, Virginia, with his wife and their very own woke baby.

Elizabeth Acevedo is the New York Times bestselling author of the National Book Award-winning novel, The Poet X. She holds a BA in Performing Arts from The George Washington University and an MFA in Creative Writing from the University of Maryland. She resides in Washington, DC with her partner.

Olivia Gatwood has received national recognition for her poetry, writing workshops, and work as a Title IX Compliant educator in sexual assault prevention and recovery. She is a finalist at Brave New Voices, Women of the World and the National Poetry Slam. Olivia has been featured on HBO, Huffington Post, MTV, VH1, and BBC, and she has performed internationally at over two-hundred schools and universities. Originally from Albuquerque, New Mexico, she now lives in Boston, Massachusetts. Olivia’s poetry books include Woke, Life of the Party, and New American Best Friend.

Books similiar to Woke: A Young Poet’s Call to Justice may be found in the categories below: