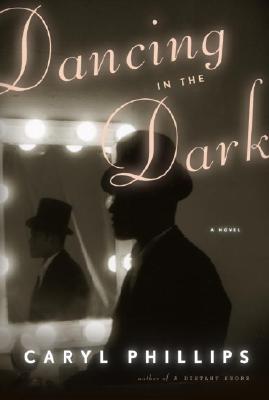 Dancing in the Dark
by Caryl Phillips

Book Description:
A searing new novel that reimagines the remarkable, tragic, little-known life of Bert Williams (1874—1922), the first black entertainer in the United States to reach the highest levels of fame and fortune.

Even as an eleven-year-old child living in Southern California in the late 1800s his family had recently emigrated from the Bahamas Bert Williams understood that he had to “learn the role that America had set aside for him.” At the age of twenty-two, after years of struggling for success on the stage, he made the radical decision to do his own “impersonation of a negro”: he donned blackface makeup and played the “coon” as a character. Behind this mask, he became a Broadway headliner, starring in the Ziegfeld Follies for eight years and leading his own musical theater company as influential a comedian as Chaplin, Laurel and Hardy, and W. C. Fields.
Williams was a man of great intelligence, elegance, and dignity, but the barriers he broke down onstage continued to bear heavily on his personal life, and the contradictions between the man he was and the character he played were increasingly irreconcilable for him. W. C. Fields called him “the funniest man I ever saw, and the saddest man I ever knew,” and it is this dichotomy at Williams’s core that Caryl Phillips illuminates in a richly nuanced, brilliantly written narrative.

The story of a single life, Dancing in the Dark is also a novel about the tragedies of race and identity, and the perils of self-invention, that have long plagued American culture. Powerfully emotional and moving, it is Caryl Phillips’s most accomplished novel yet.

More books like Dancing in the Dark may be found by selecting the categories below:

Tell us what do you think about Dancing in the Dark.