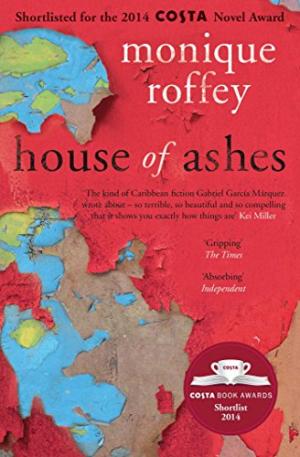 House of Ashes
by Monique Roffey

Book Description:
The City of Silk is seething. The corrupt government has been ruling over the people too long and the city is becoming restless. Then one hot evening The Leader, a head of a group of rebels, gathers his followers and tells them: ’Today, we will be making history. For ourselves, and our fellow countrymen of Sans Amen.’ And so a ragtag collection of men and boys take up arms and storm two of the most important buildings in the city: the house of power and the television studios. Together they will take back what is rightfully theirs. Caught up in the madness is Ashes. A bookish, learned man, he has been swept up by The Leader’s powerful rhetoric. But now that words have turned to action he is not so sure anymore. And trapped inside the government building with the rebels is Aspasia. A proud woman, a mother of boys, she sees much of her sons in these boys with guns in their hands and power in their eyes. A powerful, evocative and important novel from the author of The White Woman on the Green Bicycle.

More books like House of Ashes may be found by selecting the categories below:

Tell us what do you think about House of Ashes.