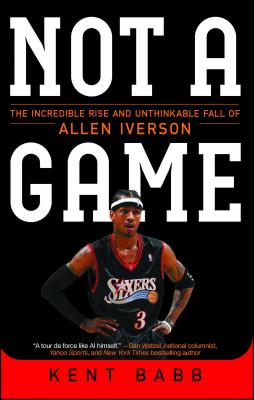 Not a Game: The Incredible Rise and Unthinkable Fall of Allen Iverson
by Kent Babb

Paperback Description:Shortlisted for the PEN/ESPN Award for Literary Sports Writing "A searingly honest and intimate portrait of a captivating icon." —Baxter Holmes, ESPN NBA reporter Through extensive research and interviews with those closest to Iverson, acclaimed Washington Post sportswriter Kent Babb gets behind the familiar, sanitized, and heroic version of the hard-changing, hard-partying athlete who played every game as if it were his last. Former NBA superstar Allen Iverson was once one of America’s most famous athletes: a trendsetter who transcended race, celebrity, and pop culture, and emerged from a troubled past to become one of the most successful and highly compensated athletes in the world. Now, his life and career come vividly to light in this "searingly honest" (Baxter Holmes) biography. Babb brings to life a private, loyal, and often generous Allen Iverson who rarely made the headlines, revealing the back story behind some of Iverson’s most memorable moments, such as his infamous "Practice" rant, delving even deeper to discover where Iverson’s demons lurked. He drank too much, stayed out too late, spent more money than most people could spend in a dozen lifetimes—blowing more than $150 million of his NBA earnings alone. His then wife Tawanna, seen often as the mild-mannered woman who tamed the bad boy, tried to keep her husband and family on the rails. But, as so many others learned on basketball courts, she was no match for the force of nature that was Iverson. Jealousy, meanness, and relentless eventually wore down even his biggest fans, teammates, and, eventually, even his most formidable opponent.

More books like Not a Game: The Incredible Rise and Unthinkable Fall of Allen Iverson may be found by selecting the categories below: