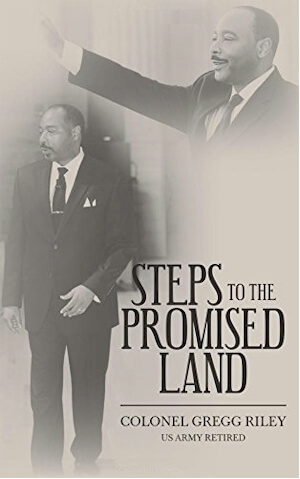 Steps to the Promised Land
by Gregg Riley

Book Description:
Recognizing trouble in the land, Dr. Martin Luther King Jr. stood against the darkness. “Only when it’s dark enough can you see the stars,” King said. An assassin cut short King’s life before his dream of equality could be fully realized, but that didn’t stop others from picking up the torch. Among them is motivational speaker Colonel Gregg Riley. A skilled and in-demand public speaker, he provides some of the most inspiring messages for today’s issues. Riley picks up where King left off in this book of speeches, Steps to the Promised Land. He’s seen the challenges that hinder people from reaching their full potential. He’s determined to help lead us on our journey “out of the wilderness and into the promised land.” A sought-after actor who reenacts Dr. King’s most famous speeches with amazing authenticity and feeling, Colonel Riley puts the same concern and enthusiasm in his own speeches on subjects such as police profiling, nonviolent protests, and the value of veterans. He is right on the mark with his new approaches to education, the power of choice, and fighting against inequality. Our nation continues to grapple with the darkness. Steps to the Promised Land helps us see the light.