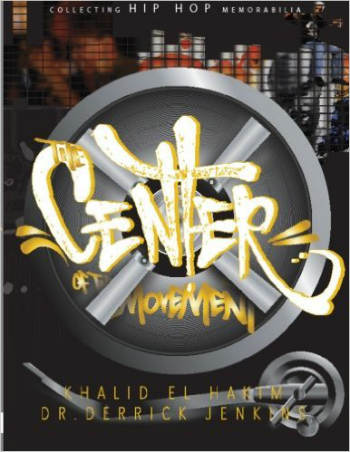 The Center of the Movement: Collecting Hip Hop Memorabilia
by Khalid el-Hakim

Authored by Khalid el-Hakim and Dr. Derrick Jenkins, The Center of the Movement: Collecting Hip Hop Memorabilia is a journey through the personal archives of the Black History 101 Mobile Museum’s hip hop artifacts. This journey, narrated by its curator and collector Khalid el-Hakim, a Detroit native, exhibits a lifetime commitment to preserving the cultural relevance of this thing called "hip hop." As hip hop developed and grew, el-Hakim, a life-long hip hop head, grew and developed alongside the culture gleaning all that spoke to him through his journey. Now these hundreds of collectibles are intended to speak to the reader. With personal narratives on each item giving background, significance, and even a value, the items are contextualized and brought to life in personal ways chronicling one of the paths taken in the expanse of hip hop which fostered the birth, rise, and increase of hip hop in the Motor City and ultimately leading to many of the Black History 101 Mobile Museum collection pieces. Through his many travels, with the museum and as one of the vanguards of black cultural preservation, el-Hakim has befriended many artists, collectors, industry insiders, and many others whose voices are heard in the book through interviews, essays, poems, and other artistic expressions, further adding new layers of contexts and depth to the chapters. The Center of the Movement (named after a song on J Dilla’s "Rebirth of Detroit" album) is a fun, informative, and fascinating view into the little known world of hip hop memorabilia collecting and those who do it and have done it for years and the stories of their process of gathering and preserving, as well as an all access entre into the Black History 101 Mobile Museum’s hip hop artifacts and the stories behind them. With interviews from Bill Adler, Paradise Gray, Professor Griff, KRS One, Ernie Paniccioli, Andre LeRoy Davis and others.