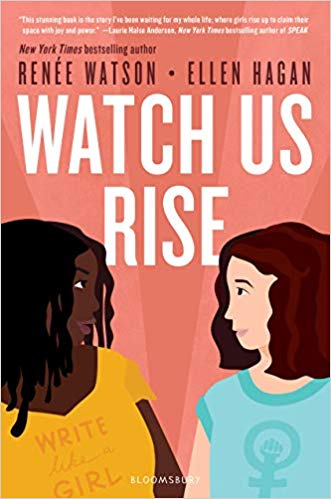 Watch Us Rise
by Renée Watson and Ellen Hagan

Read Our Review of Watch Us Rise

"This stunning book is the story I’ve been waiting for my whole life; where girls rise up to claim their space with joy and power.” —Laurie Halse Anderson, New York Times bestselling and award-winning author of Speak

Newbery Honor and Coretta Scott King Award-winning author Renée Watson teams up with poet Ellen Hagan in this YA feminist anthem about raising your voice.Jasmine and Chelsea are best friends on a mission—they’re sick of the way women are treated even at their progressive NYC high school, so they decide to start a Women’s Rights Club. They post their work online—poems, essays, videos of Chelsea performing her poetry, and Jasmine’s response to the racial microaggressions she experiences—and soon they go viral. But with such positive support, the club is also targeted by trolls. When things escalate in real life, the principal shuts the club down. Not willing to be silenced, Jasmine and Chelsea will risk everything for their voices—and those of other young women—to be heard. Renée Watson and debut novelist Ellen Hagan present two dynamic, creative young women who stand up and speak out in a novel that features their compelling art and poetry along with powerful personal journeys that will inspire readers and budding poets, feminists, and activists.Acclaim for Piecing Me Together
2018 Newbery Honor Book
2018 Coretta Scott King Author Award
2017 Los Angeles Times Book Prize, Young Adult Finalist"Timely and timeless." —Jacqueline Woodson, award-winning author of Brown Girl Dreaming"Watson, with rhythm and style, somehow gets at … the life-changing power of voice and opportunity." —Jason Reynolds, award-wining author of When I Was the Greatest and coauthor of All American Boys"Brilliant." —John Green, New York Times bestselling and award-winning author of The Fault in Our Stars* “Teeming with compassion and insight." —Publishers Weekly, starred review * "A timely, nuanced, and unforgettable story about the power of art, community, and friendship." —Kirkus Reviews, starred review * "A nuanced meditation on race, privilege, and intersectionality." —SLJ, starred review * "Will resonate with many readers." —BCCB, starred review

Books similiar to Watch Us Rise may be found in the categories below: