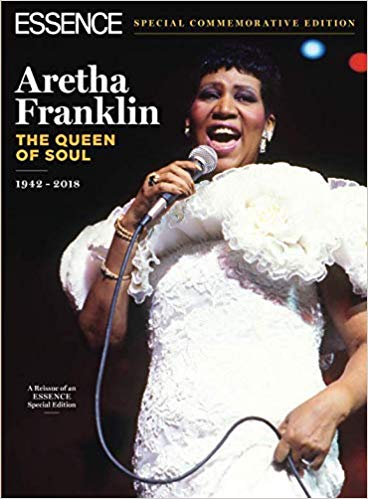 ESSENCE Aretha Franklin: The Queen of Soul, 1942 - 2018
by Editors of Essence Magazine

Book Description:
She was the undisputed Queen of Soul. With 18 Grammy Awards to her credit, the first woman inducted into the Rock ’n’ Roll Hall of Fame, winner of the Presidential Medal of Freedom, and many more accolades too numerous to mention, Aretha Franklin’s legacy will be felt on American culture and music for decades to come. Now, to honor the Queen of Soul after her death at age 76, Essence brings you Aretha Franklin, a Special Commemorative Edition that gathers five decades of stunning images from throughout her career paired with revealing interviews into one volume. The photographs document the evolution of an icon, and the exclusive interviews reveal the timelessness of her thoughts on issues ranging from motherhood and men to her commitment to perfecting her craft. Also included is a special essay that places her groundbreaking rendition of “Respect” (“R-E-S-P-E-C-T!”) within the context of its time and looks at its impact today, as well as “The Queen’s Greatest Moments.” This Special Commemorative Edition honors the groundbreaking performer as the icon and trailblazer that she was.