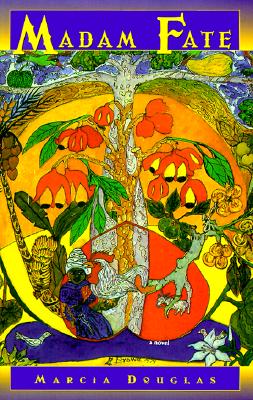 Hardcover Description:
Women of Jamaica with magical bonds to the worlds of Nature and spirits and to each other. Using a series of voices, Marcia Douglas, a poet, evokes Jamaica’s past as well as its present. The story is introduced by Bella, a Kin-Owla shape-shifterwho was there when God created Jamaica and laughed when She saw what She had done. Through the generations, Bella lives on, in one incarnation then another, always meeting suffering with fortitude, hiding the burden of her strange nature from others. The women whose lives cross hers include Ida, now an inmate of the Garden (once a British fortress, now the asylum for troubled old women), whose hardship-filled years have been redeemed by the magical calabash long ago bestowed upon her by the Rolling Calf boy; and Claudia, an educated woman who comes to the Garden hoping to find the mother who abandoned her as an infant. There is Muriel, who ventures to New York City in search of a better life, and Andrea, the friend she makes there who is also from Jamaica. There is young Gracie, who seeks comfort for the pain of being left behind by her mother, Muriel. And then there is Mrs. Cummings, who teaches Gracie about the plants in her garden and sends her to look for the white starflower that grows on the bush known as Madam Fate.

More books like Madam Fate may be found by selecting the categories below: