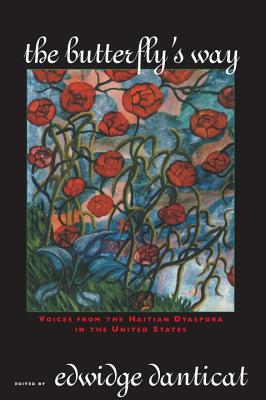 The Butterfly’s Way: Voices from the Haitian Dyaspora in the United States
by Edwidge Danticat

Paperback Description:
In five sections—Childhood, Migration, Half/First Generation, Return, and Future—the thirty-three contributors to this anthology write movingly, often hauntingly, of their lives in Haiti and the United States. Their dyaspora, much like a butterfly’s fluctuating path, is a shifting landscape in which there is much travel between two worlds, between their place of origin and their adopted land. This compilation of essays and poetry brings together Haitian-Americans of different generations and backgrounds, linking the voices for whom English is a first language and others whose dreams will always be in French and Krey l. Community activists, scholars, visual artists and filmmakers join renowned journalists, poets, novelists and memoirists to produce a poignant portrayal of lives in transition. Edwidge Danticat, in her powerful introduction, pays tribute to Jean Dominique, a sometime participant in the Haitian dyaspora and a recent martyr to Haiti’s troubled politics, and the many members of the dyaspora who refused to be silenced. Their stories confidently and passionately illustrate the joys and heartaches, hopes and aspirations of a relatively new group of immigrants belonging to two countries that have each at times maligned and embraced them.

Books similiar to The Butterfly’s Way: Voices from the Haitian Dyaspora in the United States may be found in the categories below: