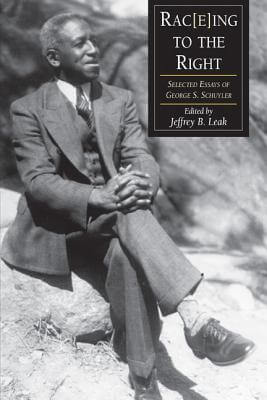 Book Description:
Rac(e)ing to the Right is a great read and brings overdue attention to one of the most popular and controversial African American writers in history. . . . These writings reveal both the presence and the limits of conservatism in the African American intellectual tradition.—Jeffrey A. Tucker, University of Rochester From the 1920s to the 1970s, George S. Schuyler was one of the country’s most prolific—and controversial—observers of African American life. As journalist, socialist, novelist, right-wing conservative, and, finally, political outcast, his thought was rife with insight and contradiction. A collection of Schuyler’s political and cultural criticism, Rac(e)ing to the Right includes many essays that are not well known as well as pieces that have never before been published. One notable example is the first printed transcript of Schuyler’s 1961 debate on the Black Muslims with Malcolm X, James Baldwin, and C. Eric Lincoln.

More books like Rac(E)Ing To The Right: Selected Essays George S. Schuyler may be found by selecting the categories below:

Tell us what do you think about Rac(E)Ing To The Right: Selected Essays George S. Schuyler.