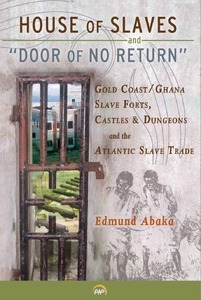 House of Slaves & “Door of No Return”: Gold Coast
by Edmund Abaka

Though the pyramids of Egypt, the obelisks of Ethiopia and the stone walls of Zimbabwe are some of the remarkable historical structures in Africa, none of them quite capture the intricate connections between African and global history as the slave castles of Modern Ghana do. More than forty-five castles, forts and dungeons dotted the two hundred and fifty mile coastline of the Gold Coast (Modern Ghana) in the eighteenth and nineteenth centuries. Grim and foreboding in their appearance, these castles and dungeons have become eternal coastal signposts of a disturbing past. They have long been remembered as the place where victims of the slave trade were imprisoned before their forced transportation to the New World. They personify the slave trade in all of its grim realities: estrangement, brutality and degradation. Here, in these "ships at permanent anchor," victims of the slave trade spent days and months in agony before their perilous and uncertain voyage to the New World.

Ghana’s slave forts and castles formed an integral part of the Middle Passage. Yet, they have received very scant scholarly attention. House of Slaves is a multi-layered historical study of the slave forts and castles of the Gold Coast that focuses on the people who worked in these slave castles. The book seeks to unravel the interplay between people and structures in the facilitation of the Atlantic Slave Trade on the West African coast. Life in the slave castles mirrored the conditions aboard slave ships on the Atlantic: starvation and disease. A better understanding of the West African dimension of the trans-Atlantic Slave trade; the creation of the early African diaspora in the Americas, the West Indies and Europe, and the "reconnections" between Africa and its global diaspora, since the 1990s, should begin from a textured analysis of the activity, memory and symbolism that these coastal ships at permanent anchor embody in African history and the history of the African Diaspora."

Here is a solid book on the forts and castles of Ghana that presents to us, with creativity and innovation, their history, significance, and legacy. Abaka fuses memory with history to remind us of the cruel past, to encourage us to remake our world in positive ways, and to adorn our humanity with positive values and concerns for the poor and marginalized.
—Toyin Falola, Distinguished Teaching Professor, The University of Texas at Austin and Mwalimu Nyerere Chair of Modern African Studies-At-Large, Benue State University Nigeria

Over 30 forts and castles on the coast of Ghana offer mute, but powerful testimony to the importance of the Atlantic slave trade. Edmund Abaka tells their story, writing not only about the architecture, but also about the economic and cultural exchanges that took place there, the suffering African slaves experienced within them, and their importance today as sites of memory.
—Martin Klein, Professor Emeritus, Department of History University of Toronto

More books like House of Slaves & “Door of No Return”: Gold Coast may be found by selecting the categories below: