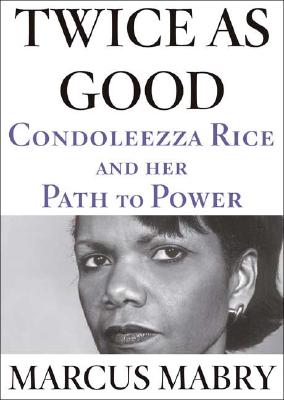 Twice As Good: Condoleezza Rice and Her Path to Power
by Marcus Mabry

Book Description:
Perhaps no American leader is better known and less understood than Secretary of State Condoleezza Rice. Beyond the dramatic story of her pasther ascent from segregated Alabama to the halls of powerand the controversy of her present, little is known about her as a woman, and while she has broken barriers and achieved extraordinary success, she is also one of the most polarizing figures of our time. As an African American girl growing up in the South when the civil rights movement was at its most tumultuous and inspiring, her own views on race are complex. While she has benefited from advances in civil rights legislation and evolving acceptance of blacks, hers has been a singularly individualistic rise, the product of her parents’ determination to make her "special."TWICE AS GOOD: CONDOLEEZZA RICE AND HER PATH TO POWER, is the first biography of Rice to reveal the private woman behind the public image that has become so familiar to people around the world. Bringing his superlative skills as a journalist to bear on this most intriguing of subjects, Newsweek Chief of Correspondents Marcus Mabry chronicles the fascinating story of Rice’s life so far, from her childhood in Alabama and Coloradowhere she loved ice skating and playing the piano-to her discovery of international affairs at the knee of Madeleine Albright’s father Josef Korbel to her role in taking America to war in Iraq. What drove her to the fateful decisions that the United States and the world are now living with? How will history judge her and what awaits her after her service to George W. Bush? Mabry answers these questions in a deeply nuanced portrait of a driven woman of many contradictions whose power is vast-and still growing…

More books like Twice As Good: Condoleezza Rice and Her Path to Power may be found by selecting the categories below:

Tell us what do you think about Twice As Good: Condoleezza Rice and Her Path to Power.